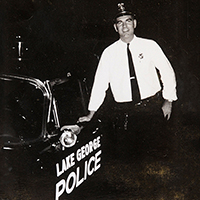 There were big headlines aplenty in 1971: Richard Nixon taking the U.S. dollar off the gold standard and announcing he would be the first U.S. president to visit the People’s Republic of China; Joe Frazier beating Muhammad Ali in one of the greatest heavyweight boxing championships of all time; and the New York Times publishing the first installment of the classified Pentagon Papers. Flying under the radar that year was the election of a big, raw-boned cop as mayor of Lake George, N.Y. Robert Blais, seen in a 1957 photo (above) early in his police career, is still going strong as mayor of that Adirondack town, burnishing its reputation as one of the premier tourist meccas in America.

[How a journalist found his way back to Lake George: See February 11, 2016 Notes From The Editor.]
BUY THIS STORY
Click to email this teaser to a Friend